Let’s get started. If you don’t understand English clearly, You can read in Bengali Version, 7 Easy Rules for Using Articles Correctly

At first, you have to know where we use an article. We use articles only with a Noun.

Sometimes, adverbs and adjectives sit before a noun. Then we can place articles before adjectives or adverbs.

Here “dog” is a noun and black is an adjective, then we used article (a) before the adjective. But we are using the article for “dog”.

So, we have to make sure we’ll use article only for a Noun. Sometimes, adjectives take a noun. We’ll learn about it later. 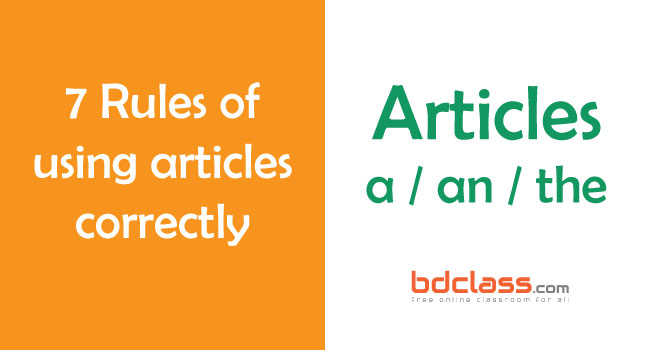 A/ An means “One”. Remember, when you are talking about one thing or person, such as “one cat, one car, one elephant or one teacher”, you can say “a cat, a car, an elephant or a teacher.

One means a single one. So, we use a/an before singular countable nouns. Countable nouns are those nouns we can count by 1, 2, 3, 4.

Water is a noun. But you can not count it by 1 water, 2 water, right? You can say 1 glass of water or 2 glass of water. So, water is an uncountable noun and it will take no article.

Hope you understood rule no 1. Now here is a test for you.

Find the errors from the following.
a) a cell phone
b) a happiness
c) a pretty lady
d) a table
e) an idea
f) a black shirt
g) an advice
h) a doctor
g) an easy question
h) a hair

Rule #2: ‘A’ before Consonant Sounds, ‘An’ before Vowel sounds.

Always use (a) before consonant sounds but (an) before vowel sounds. Let’s learn more about it.

When you are using A/An before any word, know the beginning sound of that word. I have some words below. See them.

a girl, a book, a house, a cat, a pen, a girl [Here the words start with consonant sounds]

an apple, an engineer, an orange, an egg, an old man, an ice cream [Here these words start with vowel sounds]

Example 1: I have two computers, a Desktop and a Laptop. The desktop is very old but the Laptop is brand new.

Here, in the 1st sentence, I told a Desktop and a Laptop. Till this point, the computers was unknown to you.

But in the 2nd sentence, I said, the Desktop is old and the laptop is new.  Here I used ‘The’ because the computers are now known to you. You know which desktop or laptop I am talking about.

In example 2, I used a book in 1st sentence. Here you don’t know which book. It was unknown to the listener.

But in the 2nd sentence, I said the book is written by prof. Arif Mahmud. Here, you know which book I am talking about.

Example 3:
i) Can you please open the window?

In this sentence, I used the window. Here, the window is known to you. You know which window I am telling you to open. The window is of the room we are inside now.

Example 4:
i) The man working in the bank is my uncle.

In this sentence, I specified and helped you to know a man by saying “working in the bank”.

Now you understood which man I am talking about. Yes, I’m talking about a man who is working in the bank. As the man is known you (listener), The is used.

Example 5:
i) Where is the book I gave you the last week?

In this sentence, I used the book. Here you know which book I’m asking for. Yes, the book I gave you the last week.

Rule #4: ‘A/An’ for Nonspecific and ‘The’ for Specific

Example 1: I need a pen (nonspecific)

Here, I say, I need a pen. Here pen may be black or red or of any other color. The pen may be any of pens. I don’t care about it. This is non-specific.

Example 2: I need the pen I gave you last night. (specific)

Here, I said the pen. Here I’m talking about the pen which I gave you last night. No other pen will do, I need only the pen I gave you. This is specific.

Use a/an to talk about the category or type of a person or thing. I have shown some examples that show a category in each sentence.

Rule #6: Generally Use No Article for Plural and Uncountable Nouns

i) Use no article with plural and uncountable nouns in general.
ii) You can use a/an or the for singular countable noun to mean every single one.

See the example below to understand. Here all the examples show general use of plural and uncountable nouns.

2. Dolphins are intelligent. (plural noun- general use)
or, ii) The dolphin is a very intelligent animal (Singular Countable noun to mean every single one)
Here the dolphin (singular) means every dolphin is intelligent.

6. Water is important for our life. (uncountable noun)

Rule #7: Use no article with the followings;

i) Names of persons and places

Places: Bangladesh, India, Pakistan, China, Japan, New York, Dhaka
But use the with these places, The United States, The United Kingdom, The West Indies, The Netherlands, The Middle East.

ii) Names of games and languages

Now you can take a test on your article knowledge. Hope you understood well. Please make a comment if this helped you or not. You may like to read,