Here I have shown another example of describing graphs, especially for IELTS students. The Bar Charts below show the main reasons for the study among students of different age groups and the amount of support they received from employers.

We’ll summarise the information by selecting and reporting the main features and make comparisons where relevant. See the charts in the picture. 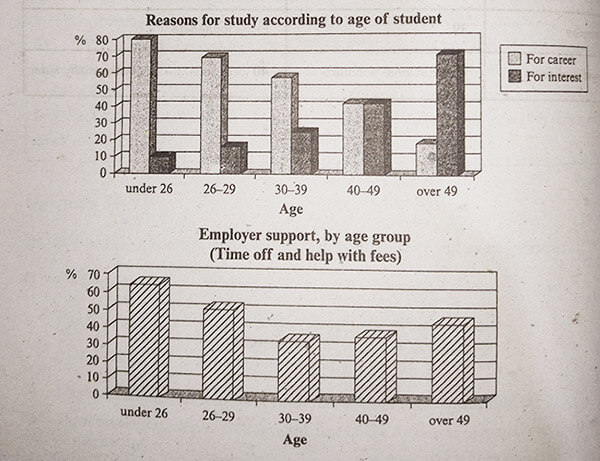 The charts illustrate the intention for study between the students as well as the support of their employers by various ages.

In the first graph, nearly 80% of students under 26yr, study for their career. This percentage gradually declines by about 10-20% every decade. On average 18% of over 49yr olds are studying for career reasons.

On the other hand, it also shows the study for interest increases with age. There are only 10% off under 26yr. The percentage increases slowly till the 4th decade and increased dramatically in late adulthood.

However, 70% of over 49yr olds study for interest in comparison to 18% studying for career reasons in that age group. in the second graph, employers support approximately 60% for under 26yr students. It drops rapidly to around 34% up to the third decade of life and then increases in late adulthood up to about 44%.

It is unclear whether employer support is only for career focus study, but the highest level is for those students who are mainly studying for career purposes.