Skip to content
Gerunds and infinitives are very common in the English language. We use them in many situations. Sometimes, we can use both of them in the same situation, sometimes we must use only a gerund and sometimes only an infinitive. If we use gerund form in the place of infinitive form, it is wrong. 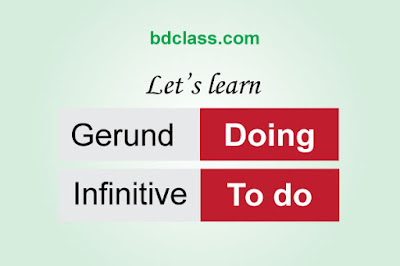 So today we shall learn

A gerund is a form of any verb when we use it as a Noun and at the same time as a Verb.
See the following sentences,
Kamal: What do you love doing?
Ripon: I love reading books and playing cricket. [Here, Reading and Playing are Gerund]
Here the question is What, So the answer should be a Noun.  You know, Read and Play are Verbs. These verbs are used as the answer to What. So they should be a Noun.  When we use a Verb as a Noun, we use Gerund

Now, I’ll discuss 5 situations where you should use a gerund.

Gerunds and infinitives can replace a noun in a speech.

Gerunds can be used as a subject of a speech. (Subject = Gerund)
Examples:

Both Gerunds and Infinitives can be used as objects of a speech.
Examples:

Only gerunds are used after prepositions. (Preposition + Gerund )
Examples:

Infinitive= to + the base form of the verb, e.g., to sing, to dance, to run. Whether you use a gerund or an infinitive depends on the main verb in the sentence. I expect to have the results of the operation soon. (Infinitive)

After Objects: Infinitives are used after sentence objects that are nouns or pronouns referring to a person.
Examples:
We asked her not to go.

Here are a few examples of verbs that need to be followed by an infinitive:

There are lots of verbs that require an infinitive after. You will learn them naturally, as you progress in your English studies.

After Adjectives: Infinitives should be used After many adjectives:

Maybe Gerunds and infinitives are confusing but they make your English speech more elegant and colorful. It is very necessary to study them and practice using them correctly. The more you notice them (gerunds and infinitives) in your study of the English language, the easier it will get!
Sometimes you will be unsure if you need to use an infinitive or a gerund in a speech. In that case, try to change the sentence and saying what you want to say in a varied way.