After reading the paragraph, you will be able to answer the following questions: 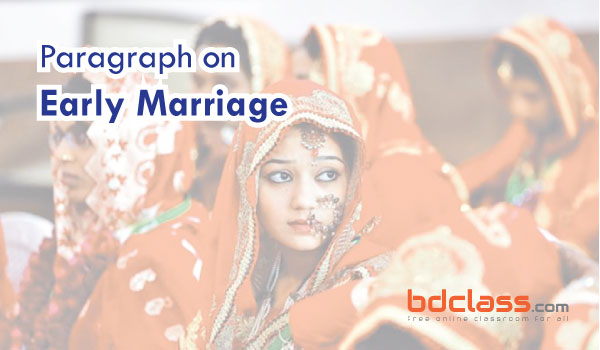 Paragraph on Early Marriage for HSC

Girl’s parents are unwilling to educate their daughters. They think that girls are born to do household work in-law’s home. That is why they think it is better to marry their daughters as early as possible. There are many bad impacts on child marriage. Child marriage violates children’s rights and puts them at high risk of abuse, violence, and exploitation. The persons who get premature marriage suffer a lot in the long run. People, especially in rural areas, tend to marry their sons and daughters off earlier than the expected time. Marrying at such premature age. Boys suffer a lot because they have to work hard to run a family. On the other hand, girls suffer even more. They have to risk their lives during premature childbirth. We should realize the bad consequence of premature marriage. The government and the common people must come forward to stop this evil system. Social awareness should be raised among the people.

You may read: Paragraph on Gender Discrimination