Dear student, this is a short paragraph on Terrorism for high school students. I have divided the writing into different paragraphs but you must write in a single paragraph.

So, let’s read the paragraph carefully. 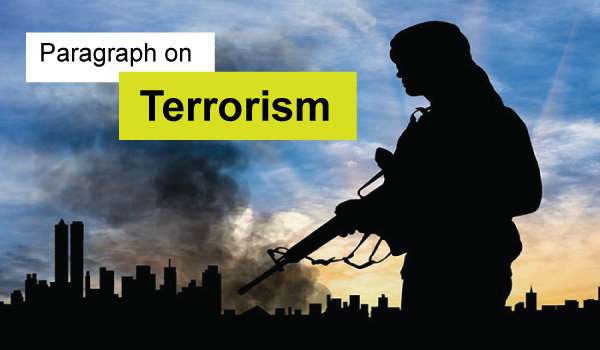 Terrorism has no official criminal law definition at the international level. Generally, terrorism refers to violent acts to create fear and intimidate societies or governments. This may be done for religious, political, or other goals. The man who is engaged in terrorism is called a terrorist.

We see the expansion of terrorism after the Second World War. Criminals commit crimes violating the rules and laws but the terrorists try to justify their activities to be moral. And here is the main difference between terrorists and criminals. Terrorism has no rule and laws, it only attacks society or colonies or crowds of innocent people in order to spread fear as well as give pressure to the government to fulfill their demands. It is the greatest threat to mankind. They never compromise their friends, family, innocent kids, woman, and old people. They shoot on the crowd, hijack flight, and other terror activities.

Currently, terrorism is a big problem in almost every country worldwide. The government, society, and common people are the main victim of terrorism. Today people want to live in peace. They do not expect any harmful activities. They want to make a better place for future generations who will lead their lives peaceful way.

You may want to read: All English Paragraphs