Write a Report on Fire Accident in Garment Factory

Suppose you are a reporter of a daily newspaper. You have witnessed a terrible road accident. Now write a report on it. 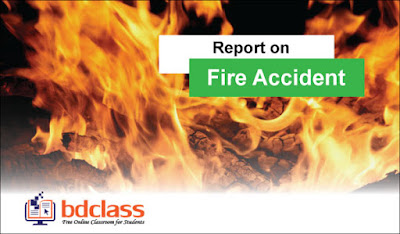 Rangamati Correspondent, Rangamati, 20 March 2014
A fire burned down a garment factory in Rangamati at 12.00 pm yesterday. Witness said the fire broke out at 12.00 on the 2nd floor of five storey building. Very soon the fire spread and damaged the whole building.
The garment was full of workers at that time. Most of them escaped themselves with the emergency gate. But some workers could not get out. As a result some workers were seriously injured.
Factory owner said that it caused a lose of over 5 crore. The fire damaged a lot of equipment, furniture and cloth. The owner said some rivals are engaged in the incident.
Sources said fire fighters rushed to the spot and controlled the fire after a long time efforts. The firefighters think that the fire originated from short circuit but they are not fully sure.
When contacted with officer in charge of Rangamati Sadar Police station, he said a case was filed and they are trying to find out the reason of the fire. Senior officials form the police and administration visited the sopt in the evening.