In our daily life, so many objects or belongings that we see and use just come across are “round” in figure such as wheel, ball, coin, accessories (bangles, necklaces, earrings).

In common layman note, the round figure is often considered as a ‘Circle ‘. A circle is a close even figure. It is formed with the fusion of all those points that are equally outlying from a fixed point in the same figure. Only then It’s called a circle.

A circle can be described in other ways. It can be explained as the locus of a point moving in a plane but in a way so that it’s difference from a fixed dot or point is always constant. That fixed point is called center of the circle.

A circle has several parts and we have already discussed one of those which is center. Here is this picture ‘O’ is the center.

Parts of the Circle and their definitions

Here are the names of all parts-
Let us learn more details with pictures and examples.

A circle has several parts and we have already discussed one of those which is Center.  Here is this picture ‘O’ is the Center. 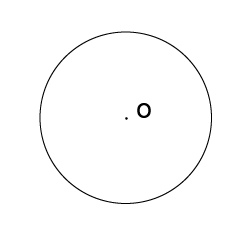 Radius is the length of the line from the center to any point of the plane. The plural form is Radii (pronounced as ray-dee-eye). Here the purple line ‘R’ is a Radius. 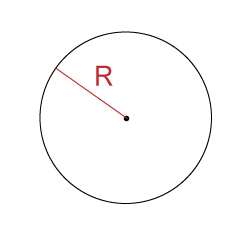 A line segment meeting two different points on the circumference of a circle is called a Chord. A circle Doesn’t have any fixed number of chords. The diameter is the largest chord of a circle.

A part of a circumference in a circle is known as an arc. It’s a continuous piece of a circle. Here in this picture CBA is minor and CDA is the major arc. 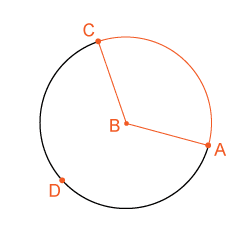 A line that touches the circle at a single point is called a Tangent. That very point is known as the point of tangency or the point of contact. In the picture, the orange line is the tangent of the circle. 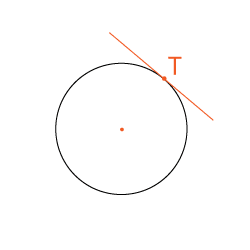 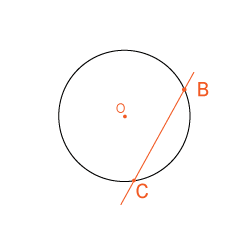 It’s the part of a circle that is surrounded by a chord and an arc is referred as a segment of a circle.  In the picture, the lower side of  AB is a minor segment and the upper side of AB is a major segment. 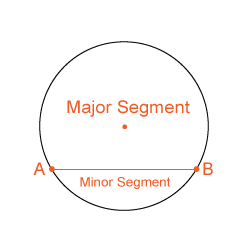 the part of a circle that is bounded by two radii and an arc of a circle is known as a sector. In the picture the white part is minor and the black part is considered as a major sector where O is the Center. 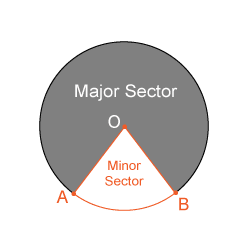 How to draw a circle with a compass

Firstly to use it, insert the tip of a pencil or pen at the hole of your compass. Then draw a line as the same length as The radius of the circle you want to draw. It can be 3-6 cm if you want medium shaped circle.

Now rotate the compass holding its head strongly from the tip of your radius which eventually will be the centre of your circle.

Remember your pencil or pen should touch the paper perfectly so that you don’t need to rotate it again to get the visible circumference.

Drawing it on a single sheet won’t give a good result because that will keep moving. Instead of rotating your compass you can even just hold it and rotate your paper. Your circle will be drawn.