Skip to content
Hey dear students, how are  you? Here I have shared paragraph on Globalization, one of the most important paragraphs for HSC exam. After reading this paragraph, you can learn what is globalization, how globalization made the world closer and its impacts. 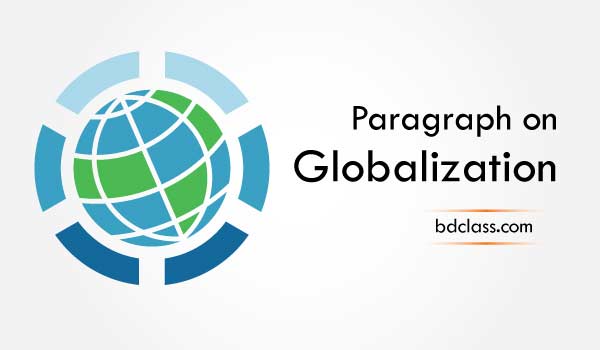 Paragraph on Globalization for HSC (200 Words)

Globalization means spreading something worldwide. It is a process of making the countries of the world interconnected for free movement of goods, service, people and information worldwide. Nowadays, the world has come closer with the development of hi-tech communication media and rapid transportation. We can now learn instantly what is happening in the remotest corner of the world. We are now able to visit to any country in the shortest possible time. Thus the countries of the world are like families in a village. However, there are advantages and disadvantages of globalization. As a result of globalization, capitalist countries are getting more facilities than than the poor countries. Capitalist countries can use labour of poor countries at cheaper cost. So some people say that Globalization has come to protect only the interest of the developed countries. Globalization integrates a global economy that influence on both economic and social relations among the countries of the world. The poorer and developing countries should ensure good governance, efficient management and investment in infrastructure so that globalization works in favour of them. Otherwise they will be exploited by the capitalist countries. If Globalization is imposed on a properly educated and trained labour force in an appropriate system it will lead to development and progress. If the developed and developing nations work together on terms of solidarity, equity and justice the process of Globalization will make the world a better place.